Typically when you save a document in other software, e.g. in a word processor, the previous version is overwritten - unless you save it with a new name every time. In Archie, most documents are versioned, meaning that whenever you save the document, it is automatically saved as a new version.
A version in Archie has four major attributes (the name of the document itself is shared by all versions):

A history of the various versions of a document can always be viewed under the History tab of the document's Properties. An example of such a document History is provided in Figure 2, below. 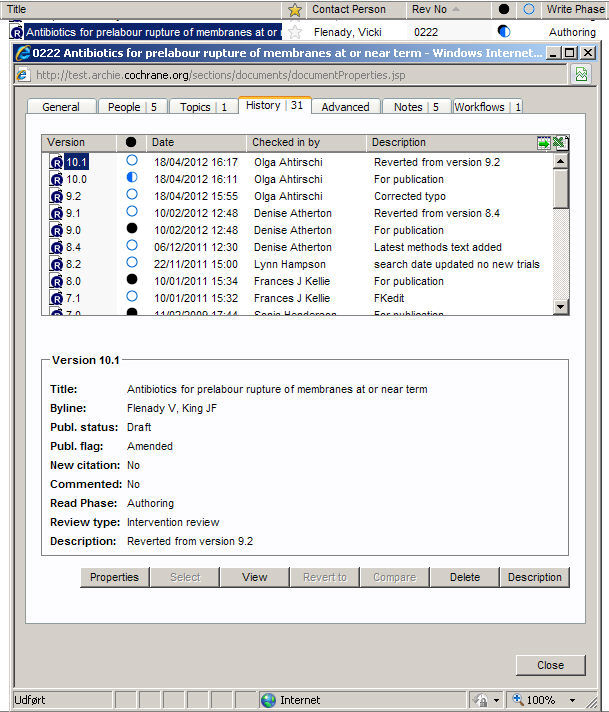 The image used in Figure 1 was taken prior to the publication deadline for Issue 5, 2012, of  the Cochrane Library. Version 10.0 of the review has been marked for publication, and its icon shows that it has the 'To be published' status. Since this is not the first version of the review being published, the overall status of the review is 'To be republished', which is shown with an icon in the Resources view. See 'Publishing documents' above for more on the publication status icons. The status panel below the list of versions will show the details for the selected version.
In Figure 2, the user has scrolled down and clicked on version 8.0, and it can be seen that this version was first published in Issue 2, 2011, of the Cochrane Library, and that this particular version was last published in Issue 2, 2012. 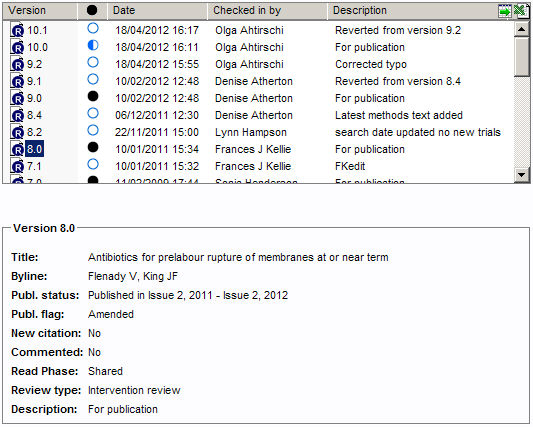 The version highlighted in Figure 1 is in the 'Authoring phase', while the one in Figure 2 has the Read Phase 'Shared'. See Authoring and editorial phases for more on review phases.

Reverting to a previous version

It may happen that the latest version is not the best version, for example if a wrong version was checked in by mistake, or if it is decided that all recent changes should be undone. Or it may be that you need to republish a review using the latest contact details in Archie but that the latest version is a draft that you do not want to publish yet. In such cases you can revert to a previous version.
Archie works from the principle that the most recent version is the best version. This means that when you check out a document, or mark it for publication, these actions will always use the most recent version.

Note: It is the action of marking a review for publication using the Publish function that uses the latest version. The actual publication always uses the version explicitly marked for publication, regardless of whether a later draft exists - see Publishing.

To revert to a previous version

Remember to revert back to the correct version if this is appropriate; for example, if you reverted to an earlier version only to republish the current publication with the latest contact details in Archie because the latest version is not ready for publication. Note that in such cases you may find it easier to use the Review contact details wizard.

When Revert is not available

Generally, you should not worry about deleting versions, as there is enough room on the server for storing lots of versions of each document. For now, rather than risking deleting a version you later realise you did need, simply retain all versions. But if there is a version of a document that you feel it is important to delete, you can do so, as long as it is not the latest version.
To delete a version, the user must have permission to write to the review in the corresponding phase. For example, Authoring versions can be deleted by Authors, while Shared versions can only be deleted by users who may write in both Editorial and Authoring phases.

To delete a document version

If the version you wish to delete is the latest version, you must first revert to the correct version (see above) before deleting.

Tip: You might find it helpful in the future if you add a note to the document to explain why there is a version number missing.